The Wanco X-Marker is an L-893(L) lighted visual aid to indicate temporary runway closure. It efficiently and effectively warns pilots of closed airport runways and taxiways, and protects maintenance crews working in these areas. Proven technology, the X-Marker is in extensive use at airports today.

The Wanco X-Marker L-893(L) Runway Closure Marker is a lighted visual aid for indicating to airplane pilots that an airport runway is closed. Designed to exceed FAA requirements, its flashing lights can be seen both day and night from miles away, clearly discernible as a giant “X” and distinguishable from other lighted visual devices used at airports, signifying that the runway is not open for landings. The X‑Marker trailer is easy to transport and can be deployed by one person in less than five minutes.

The “X” shape comprises nine lights on four independent arms and a mast. When deployed, the mast tilts upward nearly to vertical, and the “X” is centered at the top of the mast. For transport and storage, the mast tilts to horizontal and the arms pivot together. The entire assembly lies flat when stowed, held in place by support brackets and lock-pins.

System power is provided by a diesel engine. The system can run continuously for up to a week without intervention or refueling. Backup batteries are charged by the engine and continue to power the lights if the engine shuts down. Can also connect to shore power.

The power system is housed in a weather-resistant enclosure that has two side doors for easy access. For full access to the engine, generator and electrical components, the enclosure also has a hinged top panel that rises with the “X” assembly when maintenance is required. The side doors may be opened while the maintenance panel is raised, further enhancing access. An optional fluid-containment system, integrated into the enclosure, protects against leaks, spills and drips.

Some options may not be available for aftermarket installation. Please consult factory.

44 watts per fixture when on, zero watts when off
396 watts total

On engine, approx. 120 hours per tank of fuel
On batteries only, after engine shutdown, up to 24 hours 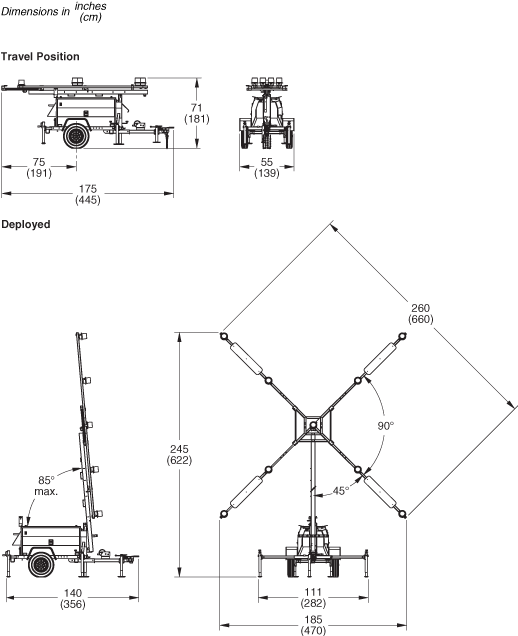 Specifications subject to change without notice.